When it comes to PC audio, Logitech is arguably one of the biggest brands on the planet. They offer everything from budget entry-level PC speakers to high-end surround sound systems for movies and gaming. Today, we’re focusing on the Logitech Z623 Speaker System with Subwoofer. This ultra-compact PC speaker system is an excellent choice for home offices, small gaming rooms, and apartments where you want to improve your PC audio. 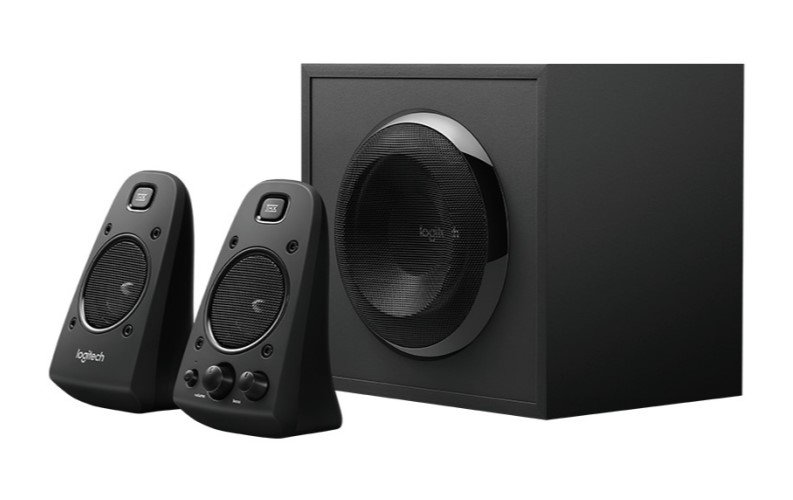 If you’ve purchased any Logitech or PC speakers before, then there isn’t anything different or unique in the Z623 design. The aesthetic is somewhat standard for a set of PC speakers. The Z623 is a 2.1 system with two 35W satellite speakers and a 130W subwoofer.  Both the satellites and subwoofer are constructed of premium plastic.

The subwoofer features a 7-inch driver in a large square enclosure. The grille sticks out a fair bit which resembles something you might find in a car audio system rather than a PC speaker. This aesthetic definitely gives the Z623 some street cred!

One design feature which many users may appreciate is the cable configuration. Most PC speakers connect to the subwoofer via the primary satellite speaker which then links to the second satellite. The problem with this is you end up with a cable trailing at the rear of your desk or hanging down in a big arc behind the desk. With the Z623, both speakers connect to the subwoofer which means the cables go over the back of your desk and out of the way. This might seem like a minor feature but, if you like a tidy workspace, it can make a big difference.

The Z623 offers two input points. On the primary (right) satellite speaker there is a ⅛-inch AUX input while on the rear of the subwoofer there is another ⅛-inch input and an RCA input. Having the two ⅛-inch AUX inputs is an appreciated convenience. The AUX input on the satellite speaker can be used for mobile devices while the AUX on the subwoofer can be used to connect your PC, gaming console, or other fixed devices. The RCA can obviously be used for other fixed devices too.

The only downside to the Z623 is there is no Bluetooth; however, you’ll be pleased to know there is a relatively cheap fix for this. The Logitech Bluetooth Audio Receiver costs just under $40 and connects to your Z623 via ⅛-inch AUX. The receiver is ultra-compact and can sit either on top of your subwoofer or next to the right satellite speaker to connect to your Z623 system.

If you prefer using digital audio input, the Z625 is available at around $20 more. The Z625 comes with an optical input on the subwoofer. If you’re looking for a PC speaker system for gaming, then the Z625 might be the better option for you. If you’re thinking of whether to go with the Z623 or the Z625, the optical input is the only difference between the two systems. Everything else, including power output and performance, is identical.

Controlling the Z623 is very simple. There are two rotary knobs; one for volume and one for bass. Next to these controls is a power button for turning the speakers on and off.

The system offers just a single output by way of a ⅛-inch headphone out located on the right speaker next to the AUX input.

The Logitech Z623 is a THX Certified speaker system. THX stands for “Tomlinson Holman’s eXperiment” which certifies a product has followed a strict set of standards for ultra-high-quality digital audio playback. The system delivers a staggering 200W RMS and 400W peak which is just mind-blowing given the size of the Z623.

The sound is well balanced for gaming, movies, and listening to music. There is nothing overly exciting about the Z623 sound signature other than the speakers deliver a great sound. It’s by no means ‘audiophile quality’ however, at $150 price point, the sound quality is better than you would expect.

One thing that is a little disappointing about the Z623 is the subwoofer. While it does produce some sub-bass, it’s not as powerful as expected. Still, for small rooms, the bass will be more than sufficient. If you’re using the Logitech Z623 in an apartment, it’s definitely loud enough to annoy the neighbors. The bass is nice and punchy which makes playing games and watching movies exciting.

The satellite speakers do an excellent job with the mids and treble. The sound is well balanced and smooth with no harshness or dominant frequencies standing out. The highs are nice and crisp although somewhat back in the mix. The best overall depiction of the Logitech Z623 sound quality is ‘pleasant’.  These speakers aren’t going to win any awards for sound design, but at this price point, you definitely won’t be disappointed with the audio quality.

If you’re a Logitech fan, then you certainly won’t be disappointed with this purchase. The Z623 has thousands of 5-star reviews online and, you can see why. The system does what it says on the box and is built to last for many years.

If you’re looking for a PC speaker system for your home office, apartment, or other small space, then the Logitech Z623 is definitely worth considering. While the Z623 delivers a somewhat immersive audio experience, the system will get lost in bigger rooms. The system is great for close proximity listening but you might find it too directional for watching movies with friends or if you want to fill a living area with sound.

If you’re a serious gamer and looking for a big system, then you might find the subwoofer on the Z623 slightly underwhelming. I would recommend one of Logitech’s larger speaker systems if you’re looking for big sound and bass.

Another thing to keep in mind is the Logitech Z623 only has analog inputs. The Z625 offers a single optical input, however, neither model offers Bluetooth. If you don’t want to go with the Bluetooth receiver mentioned earlier in this article, then you will have to go with something like the Logitech Z537. The Z537 is slightly cheaper, has Bluetooth built-in but is more than half as powerful as the Z623.

See All His Posts

The Best Wireless Headphones for TV

OuterAudio is a participant in the Amazon Services LLC Associates Program, an affiliate advertising program designed to provide a means for sites to earn fees by linking to products on Amazon.com. Learn More