No matter how nice your Smartphone or tablet is, chances are the speakers are most definitely going to be the weak point. These types of devices are just not designed to project audio without sounding like it is playing inside a tin can. A good pair of earphones helps a lot but is somewhat anti-social if you are hanging out with friends.

If you not only want to listen but also share your music on the go, then the Boombotix REX offers a powerful solution in a small package. For a speaker that fits snugly in the palm of your hand, this little device packs a big sound. Portable speakers are useful but not if they weigh you down while you are on the move so the pocket-sized Boombotix REX is a very attractive option.

Anyone that sees the Boombotix REX for the first time usually has a hard time believing that it can deliver in the audio department. All such doubts are usually dispelled when you power on the speaker and play some tunes. The REX packs a stereo pair of custom-tuned 36mm drivers along with a passive bass woofer so don’t be afraid to turn up that volume button. Unless your favorite genre is death metal, in which case it is probably better to stick with earphones in public. According to Boombotix, the REX can easily push out more than 99 decibels when used in Bluetooth mode, which is louder than a typical hand drill. Depending on your musical choice it will be a lot more pleasant on the ears than a drill as well.

Even at high volume, the REX produces a clear, full-range sound thanks to the built-in equalizer which automatically reduces distortion. As I have mentioned, the REX is a small speaker so this kind of audio quality is not something that can be taken for granted.

The Boombotix REX has a stylish hexagon-shaped design that comfortably holds all the components. Due to the small size, this is not a speaker that you leave lying around on the ground so it comes with a handy built-in clip on the back. The clip makes it easy to attach the REX to anything from your jacket to your backpack or pocket. Anyone that engages in group activities such as jogging, cycling, or hiking will appreciate the hands-free nature of the REX. The colorful design also means that if you do ever manage to drop the speaker it shouldn’t be too hard to spot it again in an outdoor environment.

I quite like the minimalist design of the REX as it doesn’t look as over-engineered as some other portable speakers. The front speaker grill is semi-transparent, so you can see the two drivers peeking through. Interestingly enough, the REX also supports custom grille kits, which can be bought separately if you really want to customize your speaker. The AUX output, input, and USB connection are all situated just below the clip on the back of the speaker. The volume, pairing, and playback controls are situated just above the clip. Access to the inputs and controls is not ideal when you have the REX clipped to something but it does keep the overall design of the speaker very clean.

The REX sports a ruggedized high impact ABS housing, so simply dropping the speaker won’t cause much damage. It is also water-resistant (note the word RESISTANT, not proof) so getting it a little wet is not the end of the world either. The REX can handle the precipitation if you use it while snowboarding, but don’t get it buried under a ton of snow and expect it to still work. Boombotix is so confident in the durability of their speaker that it comes with a one-year “No Matter What.” I suspect that if the “what” includes stuff like tire tracks over or bullet holes through the REX there might be some questions asked, though.

The Boombotix REX uses standard Bluetooth to connect to your devices and despite the clip on the back, the range of 33 feet means you don’t have to stay anchored to it. The REX also sports another interesting feature which is its ability to double as a Bluetooth receiver. Simply connect the REX to whatever speaker setup you have using the auxiliary cord and it will channel the audio signal. This is perfect for systems that still sound good but predate Bluetooth technology.

If you find that one REX is just not enough to keep the party going, you can actually use the audio input and output jacks to string multiple speakers together. Each REX includes an audio cable so you have everything you need to daisy-chain the speakers together right out of the box. The REX is powered by a rechargeable lithium-ion battery for about six hours of continuous play. The battery time is not the best that I have seen but it is still good considering the size of the REX and you can probably squeeze out another hour or so if you play at a lower volume.

If you are looking for a portable speaker that is small and lightweight enough to pack in for any trip, you can’t go wrong with the Boombotix REX. You can obviously get better sound quality if you decide to go bigger but for what it is, the REX does not disappoint.

The Boombotix REX is a nice speaker with good sound quality but ultimately it is the extra features that make it stand out. 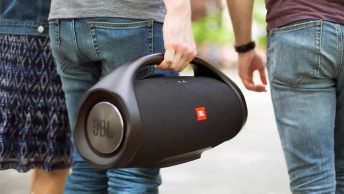 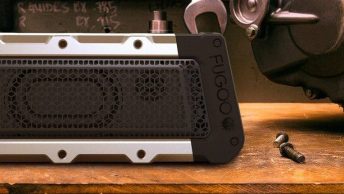 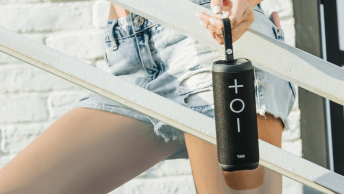 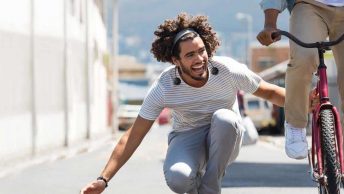 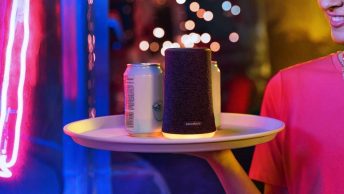 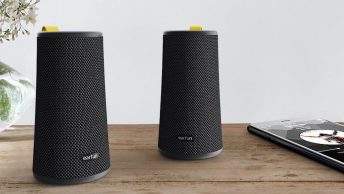