Audio-Technica is one of the industry leaders when it comes to headphones. Both in the professional and consumer audio markets. The most popular Audio Technica headphone is without a doubt the ATH-M50x, an over-ear cable headphone. The ATH-M50x is affordable, comfortable, sounds incredible and was even featured in our article on the Best Over-Ear Headphones.

In 2018, the Audio-Technica ATH-M50xBT Wireless Over-Ear Headphones were released. The release of the wireless ATH-M50xBT was met with excitement from the consumer market and contempt from the professional audio market. Let’s take a closer look at what all the fuss is about. 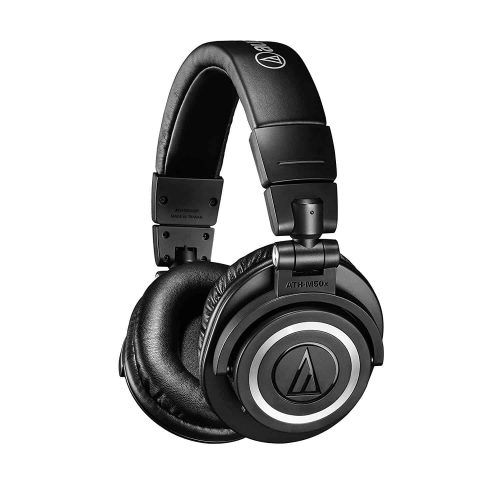 If you were to take a pair of ATH-M50xBT and hold them up to a pair of ATH-M50x, you likely wouldn’t notice any difference between the two. The good news is that Audio-Technica recognized there was nothing wrong with the original design and therefore chose to leave this element alone. The materials, padding, and fit appear to be exactly the same from an aesthetic point of view. So what has changed?

Firstly, the ATH-M50xBT is a wireless headphone featuring the latest Bluetooth version 5.0 which is compatible with A2DP, AVRCP, HFP, HSP Bluetooth profiles. The headphones have a range of 10 meters (33 feet), more than sufficient for the average consumer. The built-in battery powering the ATH-M50xBT has an impressive 40-hours of playing time which is better than most competitors. Charging time from flat is 7 hours which is a long time so you’d want to ensure the ATH-M50xBT are fully charged for long haul flights.

The cable and even the connector into the headphone ear cup on the ATH-M50xBT is vastly different from the original. With the ATH-M50x you got three cables, a 1.2m to 3.0m (3.9′ – 9.8′) coiled cable, a 3.0m (9.8′) straight cable and a 1.2 m (3.9′) straight cable for mobile devices. The two longer cables featured a threaded ⅛-inch connector with a ¼-inch adapter for professional audio use.

With the ATH-M50xBT you get only one cable, a 1.2 m (3.9′) straight cable with inline one-button remote and microphone for hands-free calling. The ⅛-inch connector which goes into the headphone ear cup does not lock in place like the original ATH-M50x preventing the cable from pulling out. I don’t feel this is an issue since the ATH-M50xBT is designed as a wireless headphone for use with mobile devices rather than moving around a studio. Having said that, the ATH-M50xBT cable sits securely in place and doesn’t feel as though it will pull out when moving around. 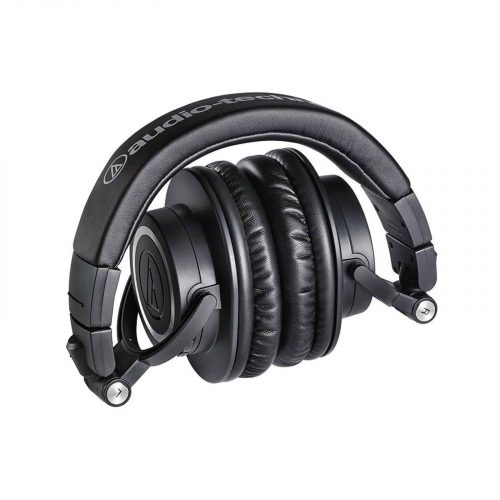 A really cool feature with the ATH-M50xBT is the touch-sensitive pad on the left ear cup. Tapping the pad activates voice assistants like Google or Siri. As not everyone uses voice assistants, I feel this is a bit of a wasted feature. The touchpad could have been better utilized for skipping tracks or play/pause. Another small annoyance is the three buttons on the left ear. They are really close together and at an awkward angle making them easy to access and operate. Personally, I very rarely use the buttons on headphones and even if I did, this wouldn’t be reason enough for me not to buy the ATH-M50xBT.

Also located on the left ear cup is the ⅛-inch cable input and micro USB charging input. Unfortunately, the ATH-M50xBT does not have a cable input on the right ear. 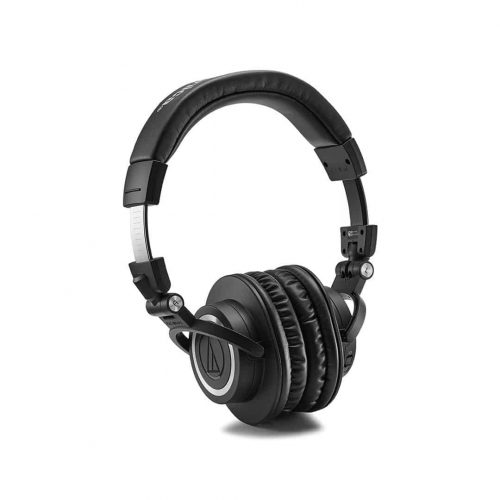 Finally the sound. How does the ATH-M50xBT stack up against the original when it comes to sound? If you use a cable connection with the ATH-M50xBT the sound is much the same as the ATH-M50x. The headphones sound warm with a nice solid low-end response. The clarity in the mid-range and high frequencies is exceptional going you the ability to pick out every detail and nuance in the audio you are listening to. The sound is flat and true without sounding dull and lifeless which is what so many loved about the ATH-M50x.

Using the ATH-M50xBT as a wireless headphone is a different story. While the sound quality is far superior to most wireless headphones on the market, it’s certainly not the same experience as using the cable. The Bluetooth compression means you get a slight amount of frequency loss in which you lose some detail and clarity in the audio. Having said that, the difference is so slight that most people won’t even notice. For the audiophiles, this might be an issue but I’m pretty sure even these consumers will appreciate just how good the ATH-M50xBT sound for a wireless headphone under $200. And that’s really one of the best features of the ATH-M50xBT, the price. For under $200 you’re getting a premium sounding wireless headphone with a 40-hour battery life leaving the competition in the dust. 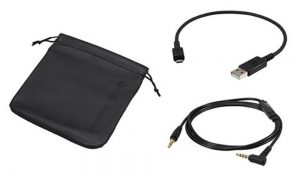 If you’re a fan of the ATH-M50x, then the ATH-M50xBT is essentially the same headphone but with wireless capability. Keep your ATH-M50x at home or in the studio and the ATH-M50xBT for travel. The ATH-M50xBT doesn’t have active noise cancellation, however, there is a significant amount of noise isolation which offers a good degree of attenuation for noisy environments like planes and public transport.

With the ATH-M50xBT you get 40-hour battery life, the option of cable or wireless, inline remote and microphone with the same features in the ear cup, voice integration and incredible sound for under $200. If you are knowledgeable about the headphone market you’ll know that’s incredible value for a premium headphone brand.

Headphones vs Earbuds – Which Should I Buy?

For up-to-date information and guidance on COVID-19, please visit the WHO or CDC websites.

OuterAudio is a participant in the Amazon Services LLC Associates Program, an affiliate advertising program designed to provide a means for sites to earn fees by linking to products on Amazon.com. Learn More